g)Spese per singoli beni inferiori a € 500 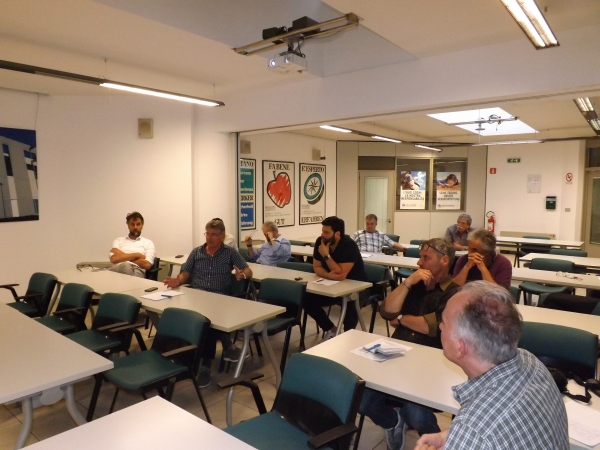 So I will not apologize for the wonderful title of this post, because it really does represent the exact issues I want to discuss today in terms of energy efficiency. Rather, I apologize, because this post is really written for the exploring engineer, not for the spoon-fed. It will be complex and I may ask questions. But I will provide enough layman’s background that anyone bright and persistent enough can understand.

We will touch on the simplest ideas of energy efficiency, and mix in aspects of Nash’s work in game theory for optimization of winning strategies. This is The Nash Equilibrium – the brilliant outcome of thestar mathematician and man who struggled and learned to manage paranoid schizophrenia portrayed in the wonderful film A Beautiful Mind

All-in-all we will argue about whether energy efficiency has been argued about enough, and we will also look at the Pareto Frontier (in layman’s terms).

We will see that the way buildings control systems are operated to day are generally sub-optimal because we do not even consider everyday economic or game strategy theories to our objectives.

We are guilty, because we let the big players in our industry get away with giving; not second best but provably sub-optimal worsts!

I dare say, some of these ideas may be new to you – as they are to me, so when I have them wrong please, please do comment and correct my thinking (in the comments section below rather than on linkedInbecause otherwise only some readers see them). Better still think and contribute and enrich the discussion, because its written for us all…

Where do we start? At the beginnings of Game Theory.

Let’s imagine that an simple air handling unit supply (AHU) is a battleground between two gaming warriors. Lets introduce them:

Henry (the Heater)
Henry cares primarily that fresh air is delivered at least warm enough for comfort – lets say 15 C (59F)
(Note to laymen air warms up because of unintended sources so a supply below comfort temperature is normal)
When he has been in error he seeks to correct the total sum of his historical errors to zero.
Given that achievement he seeks to use as little heat as possible.

Charles (the Chiller)
Charles cares primarily that fresh air is delivered at least warm  cool enough for comfort – lets say 15.5 C (59.9 F)
When he has been in error he seeks to correct the total sum of his historical errors to zero.
Given that achievement he seeks to use as little cooling as possible.

There is a third character Henrietta – She is an energy manager, and she applies common sense. More of  Henrietta later.

The more aware of readers will realize that Henry and Charles sound as though they been set up according to normal convention with PID loops for control and they have probably been set up for a fight !

The BIGGEST difference is that the good one has a temperature sensor immediately after the heating coil and the rubbish one does not.

In my experience cost cutting measures eliminate this very cheap, very essential sensor in around 95% of implementations including some by the biggest players in the AHU supply market (over 1.5 Billion Euros in Europe alone).

Why is this sooooo stupid ?

The first can stabilize at many Nash Equilibria that do not lie on the Pareto Efficiency Frontier.

In English (or engineering) ?

When the PID loops controlling each coil (or  register or heat exchanger) achieves its fundamental objective of comfort (that is Henry and Charles are basically happy) both H and C are active under the majority of cases.

So simplistically if air is coming in at 10C Henrietta would like to hold Henry back to delivering air at 15C and stop Charles doing anything at all.  But if Henry does say 75% output and Charles does 25% output there is still heating on balance so H and C are happy but Henrietta is not.

Henry and Charles are happy because they have found a Nash Equilibrium. They achieve their objectives, but knowing the others strategy does not allow them to change their position of being in conflict.

This is referred to in the wiki article above which states:

The Nash equilibrium may also have non-rational consequences in sequential games because players may “threaten” each other with non-rational moves”.
Henrietta cries foul ! She sees that if Henry would back off, Charles could too, or if Charles would back off Henry would too.  But Henry and Charles have a job to do and cannot budge an inch.
Henrietta realizes if she forced the implementation of the temperature sensor downstream from Henry that is upstream from Charles, Henry would play his own game and ignore Charles’ strategy.
The very fact that Henry does not know Charles means that he optimises for heating at no error between coils.  This means that Henry never calls on Charles to cool.
Now for the cost of a few cents or euros a new sensor prevents Nash Equilibria that are not simultaneously on the Pareto Efficiency Frontier :
“Pareto efficiency, or Pareto optimality, is a concept in economics with applications in engineering. The term is named after Vilfredo Pareto (1848–1923), an Italian economist who used the concept in his studies of economic efficiency and income distribution[citation needed]. In a Pareto efficient economic allocation, no one can be made better off without making at least one individual worse off. Given an initial allocation of goods among a set of individuals, a change to a different allocation that makes at least one individual better off without making any other individual worse off is called a Pareto improvement. An allocation is defined as “Pareto efficient” or “Pareto optimal” when no further Pareto improvements can be made.”
“The notion of Pareto efficiency is also useful in engineering. Given a set of choices and a way of valuing them, the Pareto frontier or Pareto set or Pareto front is the set of choices that are Pareto efficient. By restricting attention to the set of choices that are Pareto-efficient, a designer can make tradeoffs within this set, rather than considering the full range of every parameter”  (from wiki)
And it just so happens that Nash Equilibra on the Pareto Efficiency Frontier in this very common case are Strong Pareto Optima, in all cases where in the other cases Nash Equilibria are not Pareto efficient.
Simply stated this means that taking the sensor out costs you in almost all circumstances !
FACT it is the single greatest source of comfort heat-fighting chilling globally  – and it seems nobody gives a damn.
Now Henrietta has a friend who is an idiot – his name is Wasteful Walther.
Walther says – “we don’t need the sensor – because we prevent simultaneous heating and chilling by inhibiting valve positions being both open.”
Idiotic! – because heating happens from a hot heat exchanger AFTER you close it, and the time delay changes with load.
Walther also says – “we control with PID loops which achieve zero error over time”.
Well Walther a PID loop requires a linear response to do that without transient instability and there is not one here – it also requires a decoupled proportional signal of the error caused by the output driven – also not available here.
So we should be good Henrietta’s, save time and energy and get a sensor after (but far enough from) each controlled action and use it as a source of feedback.
The beauty of a Nash Equilibrium on the Pareto Efficiency Frontier is that it is cheap achievable and you KNOW it makes sense !

Normally, I recommend the energy manager set aside the issue of industry sector and visit any local organization that has ISO 50001. Why do I recommend that?

Management Practices Are Common across All Sectors

In more than 30 years of energy management across industrial and building sectors in North America and Western Europe, I have found the same management issues determine whether or not you have good energy practices. It is the same whether you are a food company, a paper company or a metal manufacturing company. ISO 50001 focuses on ensuring good management practice on topics such as:

As you go from one industry sector to another, the key differences are on technical topics such as:

A technical energy analysis in an automotive plant is very different from a paper processing operation. Good sector specific knowledge of energy balancing is required here. However, in your role as energy manager, you have already carried out energy efficiency projects. The good news is that you (or your energy consultant) already have the required technical knowledge which is immediately transferable to an ISO 50001 program.